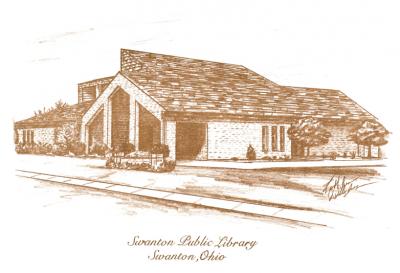 In the midst of the Great Depression, the Swanton Board of Education voted, by request of a number of local residents, on a resolution to establish a public library "to provide reading material for the inhabitants of Swanton Village School District and of Fulton County..." Thus, on August 28, 1935, the first meeting was held of the Swanton School District Public Library Board of Trustees. At this time the Board requested part of the property taxes of the county. In 1935 the budget for the library was $1500.

In 1973, due to repeated requests from the adult public, a branch library was opened at 95 North Main. Mrs. Imogene Walter served as librarian at this location.

In 1978, the Village of Swanton donated land at 305 Chestnut Street for the construction of a new library. Voters approved a .7 mill, 20 year bond levy appropriating $350,000 for the present building, which was dedicated on November 18, 1979.

A large children's programming room and handicapped restrooms were added to the rear of the present structure in the spring of 1994. In 2013 voters renewed a 0.5 mill levy that was originally passed in 2008. Following severe cuts at the state level, an additional 1.0 mill levy was passed in November of 2011 and renewed in 2016, allowing the library to continue operations without having to cut services, staffing, or resources.